The Chairman of Qantas Ltd, Mr Leigh Clifford, wrote a letter to the Australian newspaper in response to criticism from a minister of the cloth that he, Mr Clifford, and other business leaders were publicly advocating changing the definition of marriage. The existence of such criticism seemed to surprise him. Mr Clifford’s incredulity was palpable. He said “Apparently, companies have no business expressing a view on social issues” and “By this logic, should companies scrap all of their corporate social responsibility programs?” (An image of Rik Mayall in The Young Ones delivering those lines with exaggerated irony just floated across my mind.) It probably was an attempt by Mr Clifford to use irony to dismiss his critics, although I doubt it worked.

END_OF_DOCUMENT_TOKEN_TO_BE_REPLACED

Given the chance, Paul Keating, and to a lesser extent Bill Kelty and Garry Weaven, those relics of Australian labour politics and the union movement from the 1980s, champion the Australian compulsory superannuation system as a huge win for the average worker. They claim credit for winning an industrial battle to grant superannuation to the workers. Prior to their glorious victory, they viewed super as a privilege for a wealthy few. I suppose they keep banging on about it because they could be fearful of the average worker finding out one or two home truths about compulsory superannuation that are perhaps not so glorious after all.

It makes no sense at all.

The letter sent to the Australian Prime Minister is published here.

It makes no sense for business leaders to use their authoritative positions as business leaders to lobby Government on overtly civil political topics, such as the definition of marriage. Yet the letter published makes it clear that the signatories are writing in their capacity as “BUSINESS LEADERS IN SUPPORT OF MARRIAGE EQUALITY”. It’s there in the headline, conveniently shouted out in capital letters. The CEOs who signed the letter are major figures in Australian business, some of them as heads of the biggest publicly listed companies in the country. One of the signatories is the CEO of the Australian Business Council. These people are heavy hitters and they know what they are doing. Which makes it all the more confusing as to why they would participate in this lobbying. END_OF_DOCUMENT_TOKEN_TO_BE_REPLACED

Here is the headline from a piece in the February 2017 edition of The Actuary magazine:

I’m not so sure about the ‘terminal decline’ status of with-profits funds. In fact, I’d go further: I expect to see a resurgence in with-profits business within financial services over the medium term. The challenge will be finding enough actuarial resources to manage it.

With-profits is a useful label for the actuarial profession. It immediately conveys the fundamental nature of the business in question. It infers an estate, discretionary bonus distributions, policyholders’ reasonable expectations, risk management, capital adequacy and so forth. While very few new with profits insurance policies are being written now, there is an obviously similar financial asset that the community has embraced, both by direct investment and indirect investment in a superannuation fund: listed equity. END_OF_DOCUMENT_TOKEN_TO_BE_REPLACED

With Sussan Ley, the federal health minister, now the subject of an internal investigation over misusing taxpayers’ funds in excessive and dubious expense claims, it is time to recognise that a ministerial scalp and a tightening of the rules will not work. It hasn’t worked before and it will continue to not work unless a different approach is taken.

This is how to do it: each parliamentarian (cabinet members, ministers, shadow ministers and backbenchers) should be granted a fixed allowance. The allowance should be on a sliding scale, backbenchers at the lowest level. The aggregate value of all such allowances should be no more than the current annual claims for travel, accommodation and office expenses of all parliamentarians. In fact, the aggregate should be set at around 80% of the current actual expense claims. Each parliamentarian would then be free to use that allowance as they see fit in fulfilling their duties. Expenses would be deductible for tax. Any amount not used by the end of the year could be kept by the parliamentarian and taxed as personal income.

That would result in a much more efficient use of taxpayers’ money and the whole concept of expense claims would disappear.

The term Dutch disease refers to circumstances in an economy where one sector is highly successful, eg owing to a resources boom, which is driving up the value of the currency which in turn hurts the other sectors of the economy by making them less internationally competitive.  A variation on this theme is on display in Europe where a strong euro thanks to northern European economies, mainly Germany, hurts the southern European countries, particularly Greece and Italy. A free exchange in currency markets is a corrective stabilising mechanism but unfortunately for the Italians and the Greeks, they can no longer trade with lira and drachmas.

Anyway, look at the little Aussie battler’s value against the greenback: 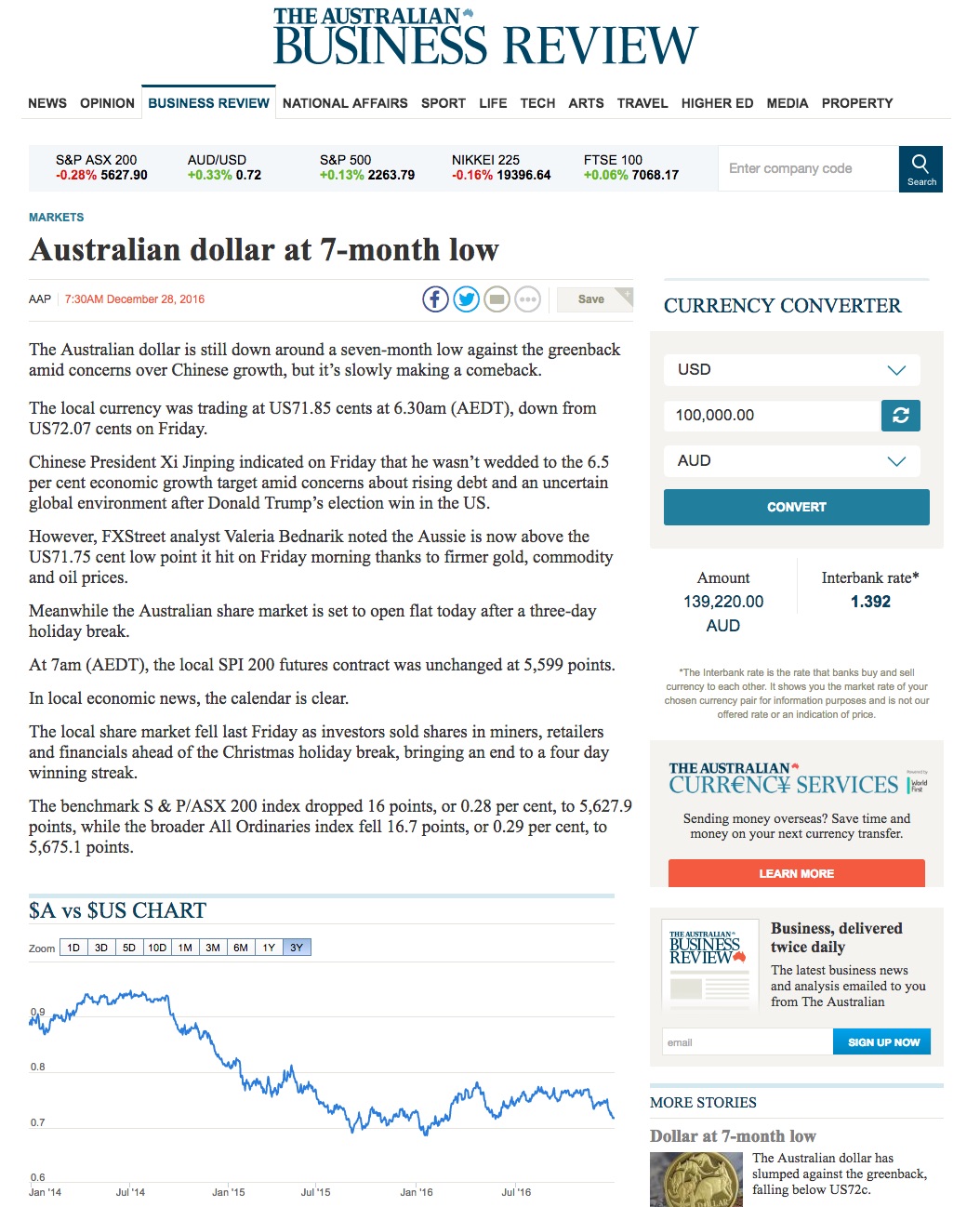 A downward trend in the A$ value against our trading partners’ currencies would make buying imports more expensive for us. But it would also make our exporters more competitive. The effects of the mining boom are slowly unwinding, although I believe the A$ needs to fall further before we see real progress.

In addition, it is not only exchange rates that make Australia a high cost country to do business: government regulation is an undue burden on enterprise which is also seriously inhibiting our competitiveness and growth prospects.

The South Australian blackout debacle was not caused by a once-in-a-lifetime storm, as I documented at this blog post.

Today is windy in Victoria. The data below shows how the wind at St Kilda harbour (just 5km from the CBD) has been rising all day. Compare this data against the data in my earlier post from South Australia. Very similar.

This weather is not abnormal.

The report below comes from The Australian newspaper today. It suggests that there is further trouble coming down the line (pun intended) for South Australia. Problems with infrastructure take time to fix. Yet, as I pointed out in this post, very windy weather is a monthly occurrence. The worst Government response would be to continue to blame a once-in-a-lifetime storm (which it wasn’t) and continue with the current policies of power generation and distribution.

In my post yesterday, I pointed out that there was nothing unusual about the weather hitting South Australia in the last few days. Hence, the inability of the State’s power network to cope with this weather showed inherent fragility that would turn away investment dollars. The State’s future is seriously in doubt – no one should think otherwise.

But some people questioned my claim that the weather was not abnormal. They may have listened to the Premier or many journalists or other climate change religionists calling this a climate change induced once-in-a-lifetime apocalyptic weather bomb (yes, those descriptions have all been used.) END_OF_DOCUMENT_TOKEN_TO_BE_REPLACED

South Australia’s electricity grid completely shut down yesterday. The whole state was without electricity for many hours. Even today, power is still out for many households and businesses. The Premier blames an extreme weather event. Well, if you look at the actual weather observations from around the state yesterday from the Bureau of Meteorology, it is blindingly obvious that while it was wet and windy, the weather was not at all extreme.

It is clear that the state’s power source is incredibly fragile.

This will make South Australia a very unattractive prospect for any new investment.